This is a peculiar case of a death of a child few days after she was born.

We will see the saptamsha chart of the father and this example will show us why it is so important to study the divisional charts.

Now, loss of the first child is not justified by first look at the rasi chart.

See the degrees of Saturn, Sun and Mercury.

This same degree conjunction of 5th and 12th Lords led to the Loss of a child. 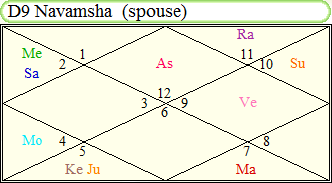 Just see how the 5th lord of D1 is placed in the navamsa chart as we are only looking from the progeny point of view at the moment.

5th Lord of D1 i.e. Saturn moves to Taurus which is the 8th house of D1(not good). It is still conjunct with Mercury. 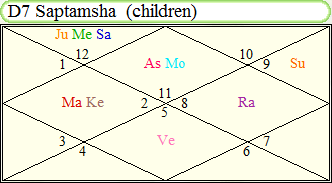 Aquarius rising with 6th Lord Moon in Lagna: Not Good

Lagna is aspected by Venus(4th,9th Lord)

Again 5th and 12th Lords are conjunct of D7, confirming the event.(If you look at navamsa 12th lord of navamsa aspects 5th lord).

Aquarius is rising which is the 5th House of D1.

Saturn the 5th lord of D1 moves to pisces that is the 6th House of D1 alongwith 6th and 12th lords of D1 Jupiter and Mercury. Clearly showing problems to progeny.

As in earlier Case Studies we saw the lords of D1 in the particular divisional chart give beautiful results. In this case Saptamsha.